Behind The Film – Thames Tideway Tunnel

Sew-er; what’s it all about?

The Edge created the film to help introduce the Tideway ‘super sewer’ to the general public; the final product is a short video featuring real Londoners talking about the incredible project.

Why is it incredible? Let’s start from the beginning. Sir Joseph Bazalgette was the man behind London’s first sewage system that was built in the 1800’s. If it wasn’t for Sir Joseph’s original idea of the system, London – to put it politely – probably wouldn’t be such a pretty place.

By 2012, the population of Greater London had grown from 4 million to around eight million. So, naturally, Bazalgette’s original system could not serve all of these people; Overflows of sewage are becoming increasingly common occurring on average 50 times a year.

This is where Tideway comes in. An impressive 25-kilometre-long tunnel is currently being constructed up to 66 metres below the Thames and when finished, it will be big enough to fit three double-decker buses side by side.

The aim of the Super Sewer (it warrants capital letters to address it, it’s that important) is to stop the sewage pollution that is running into the River Thames. To reduce the number of overflows and to protect the health of those using the water from the river. So, quite literally, making the London a better place! 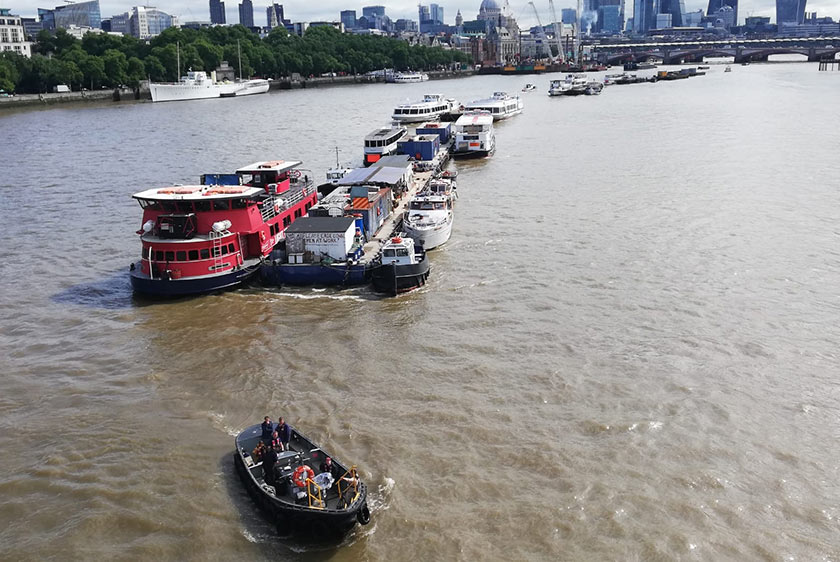 What were the aims and objectives of the film?

Using a conversational style, we wove key messages and information into the film, so that the audience went on a journey giving insight into the tunnel and the reasons for it, the engineering feat that was being undertaken and the benefits that will come from it.

The ‘Super Sewer’ is an extraordinary project for London and Londoners with Tideway, working incredibly hard to develop a construction that will prevent frequent pollution of the Thames. We wanted the film to draw on the intrigue of what had started already, feed the curiosity of those who had begun to see change and give credit to the people and teams turning the feat into reality.

What was our approach?

The fabrication process was fun, collaborative and strategic. We understood that the film was about giving Londoners a voice – so between the team, we each thought of individual lines that our actors could deliver to the camera, which in turn built an authentic script to echo the tone of the concept.

We also challenged ourselves to find different, fun and intriguing ways for people to watch and enjoy the film. In one showing, we brought a selection of people together to deliver insightful messages about the impact that the tunnel will have through a natural, flowing conversation against a backdrop of London.

Where and how was it filmed?

It was filmed in various places around London, on a boat on the Thames by Waterloo Bridge, small local businesses, a 1960’s inspired Barbican laundrette to an attractive, suburban barbershop.

Our crew worked with the highest quality equipment in order to capture scenic and authentic shots in every location! During filming, we rediscovered just how unique our city is with so many incredible places to see. It really made us feel proud to live in such a unique place. 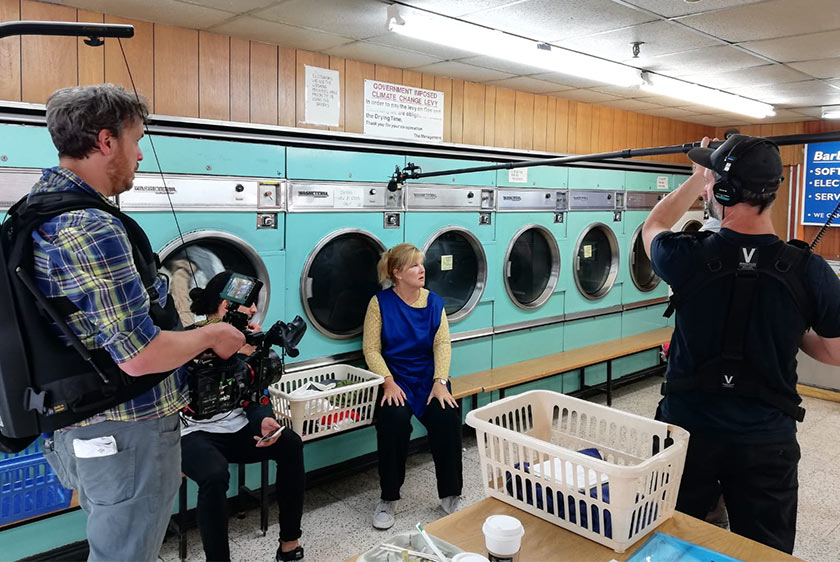 How did we select the cast and locations?

The cast was selected through an agency we regularly use, and the locations were scouted after locking down the script.

London is multicultural. It’s home to a wide array of people and we are pleased to have celebrated those, from all walks of life throughout the film.

The process of finding and securing each location was made up of extensive research to ensure each would echo the fun, light-hearted tone of the film. We searched online, and as some of us are a chatty bunch, on foot too. Popping into many small businesses to explain our film concept and ask for permission to use their site. We really wanted the viewers of the film to experience a vast range of London areas and this really came across in the final result. In the end, we filmed in approximately 13 locations in total. 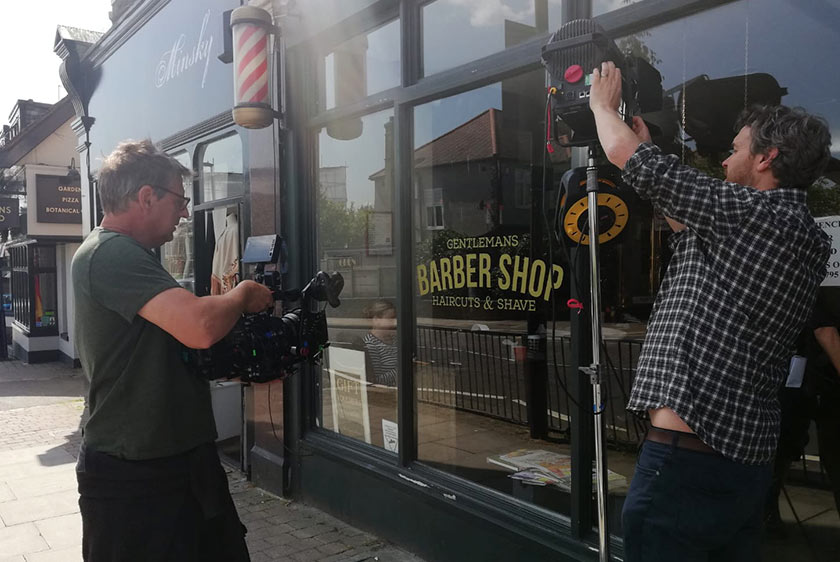 What was it like filming in London in public, in all those locations?

When your camera is exposed to the city of London, you really notice how picturesque it is. It’s exciting to be able to venture to quaint locations that you wouldn’t come across every day, to then hop on a riverboat and ride along the water with beautiful surrounding aesthetics – and all in one day!

We did, however, need to be sure we were mindful and respectful of space. After all, we were working in very popular areas where tourists were (at most) in the hundreds, and we couldn’t have any of them injuring themselves by tripping up on our kit and bags! 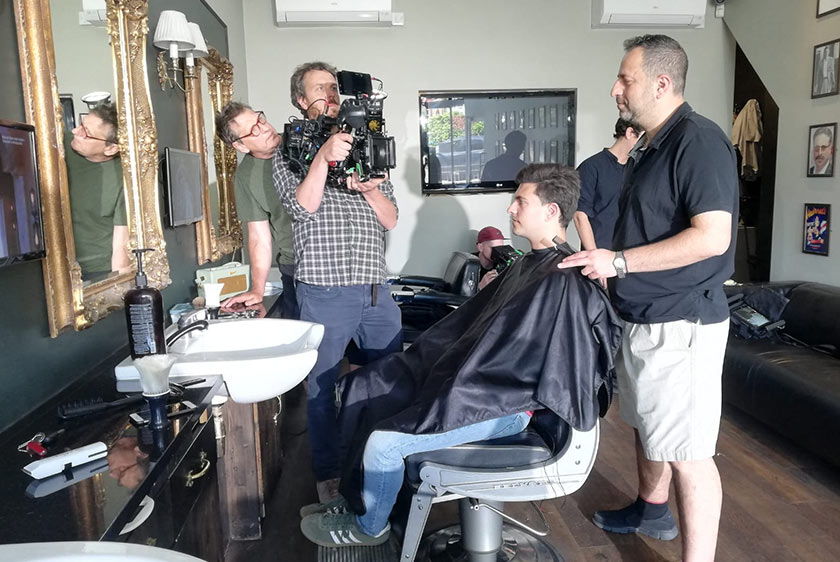 What was your approach to grading and editing

The idea was to create a conversational film that spread the word about this hugely important engineering project. We wanted to make a really engaging and informative film and getting the script right was paramount.

The shoot was like a giant jigsaw following the Thames right across London and it was good to see in the edit all the pieces fall into place. The finished film does exactly what we set out to achieve, it feels fun whilst delivering a precise message.

The final look and grade of the film was designed to support a social media look and feel, balancing a collection of different cameras used throughout the production of this film.

Final words on the finished film and where can we watch it?

This film is a great example of using London’s alternative talent channels to create high-end video content. We’re extremely proud of the balance between genuine characters and dynamic shoot environments. It was a pleasure to make a film about our amazing city and the people that make it tick each day.

What can you say about the distribution strategy?

The seeding activity was used to support Tideway’s PR team by contacting local London blogs and websites and arranging posts and shares on social media.

• 6 pieces of coverage secured reaching over 887k
• 5 traffic driving links to the Tideway website created
• 12 Facebook posts to over 2.2m followers
• 7 Tweets to over 1.8m followers
• Over 13k views delivered of the video on Facebook and Twitter