By Pete Stevenson, Executive Producer at The Edge

There’s a favourite line we use when we talk about learning. “Telling people things is overrated.”

Doing so might make the person doing the telling feel better but it rarely makes much difference to the person being told. (Except perhaps to irritate them). Does it change behaviour? Probably not. 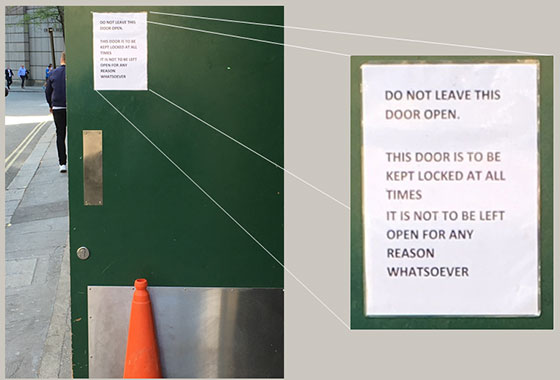 (Taken at the back of the Ivy Restaurant in Covent Garden)

And yet too often, corporate learning projects (particularly in the compliance space) seem to be based on telling learners what the policy says and how they’re expected to behave.

But most of the time that’s not addressing the actual problem. The issue is rarely that people don’t know what they should do. As a rule, most sensible people know that safety hazards are dangerous, that money laundering is bad, that cybercriminals are trying to use dodgy emails to get access to things they want. The problem is although people know what to do, they’re not doing it.

“Telling” is the wrong verb. We need to persuade – to make the learner not just intellectually understand but to emotionally buy into why this topic matters to them.

Let’s look at an example of how this works in practice. As part of their Life Saving Rules, Network Rail had introduced a new policy banning any use of phones while driving, even hands-free. There was some grumbling and resistance and they asked us to get everyone to understand why this new rule was so important.

Warning: this has some real-life language and may be upsetting.

We’ve worked a lot for Network Rail and this set of Life Saving Rules films was smaller scale, with 6 films required for £50k. So there wasn’t enough budget to tell stories using actors and stunt people.

Here we don’t know who this person and while it’s clear what’s going on, the film does present some difficulty and you have to do quite a lot of work to visualise it. We’re asking the learner to put some effort in, rather than just spoon-feeding them. That active engagement, that participation in the experience locks the learner in and makes the story stick in their head.

(We’re very interested in the psychology of film – how we experience it and how memory works. But that’s for another post.)

We’re all surrounded by sophisticated visual media in our everyday lives and people’s expectations at work are higher now too. The good news is that the films we make have evolved. They’re shorter, sharper and being brought to bear in ever more interesting ways. There’s a seismic shift underway towards moving images in Learning as in so many other walks of life. “How To” videos don’t quite get the viewing figures of Despacito, but they’re the backbone of the influencer industry, with billions of hours watched.

Quite a few of our current projects are taking an existing e-learn, stripping it down to the essential elements that people really need to know and repurposing it as short film – which gives it much higher impact and traction. And increasingly learning is being delivered across multiple platforms – with bite-sized content, repurposed or specially created to be accessed through mobile devices.

It’s worth remembering that changing behaviour is hard (especially when it’s habitual and ingrained). And that’s where storytelling through film can be so effective. Intellectual understanding isn’t usually enough to get people to shift. There needs to be an emotional component as well. So let’s think about how we can take content – which often has a dry impersonal feel – and turn it into a story, which is far more human and shareable.

Here’s another example for PwC, part of a mandatory e-learn, Living the Code. The learning isn’t about telling people what the Code of Conduct says – instead it’s about getting them to project themselves into situations where it might be able to help them make better, safer decision.

There are three different modules. From the bottom up, How We Do Business is a best practice story about Bribery which recognises that it can sometimes be difficult to do the right thing. In the middle How We Treat Each Other is a branching drama about bullying. And at the top there’s a salutary tale about the perils of social media. e join our Chilean associate, Alvaro, after he’s posted an innocent picture the week before on a secret M&A trip and attracted the attention of a Facebook ‘friend’. 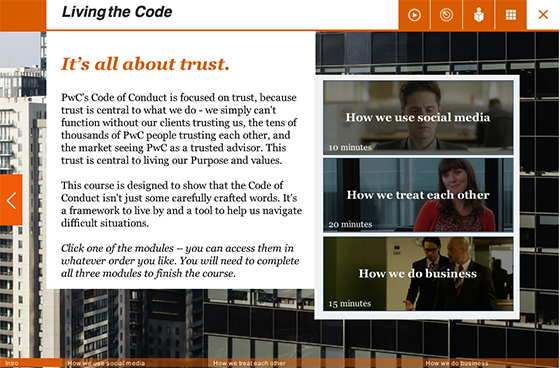 Leading into cut down of Social Media – Again we’re letting the viewer join up the dots themselves and connect the story to their own behaviour.

Credibility is critical. The films present bright, demanding consultants with real choices around how to behave in various situations and the consequences of getting it wrong.

To make the stories compelling to watch, they’re carefully written, intelligently cast, with high production value. Each film is wrapped in interactive screens that use the dramas as a jumping off point to explore the topic further, by asking people for example how often they update their privacy settings.

This course has been rolled out around PwC’s global network of around 150 member firms. One in four learners who complete Living the Code is surveyed afterwards, and of the first 15,000 people who responded, around 90% agreed or strongly agreed that the learning was effective, that they’d be able to apply it and that the course was well designed, simple to follow and made it easy to learn.

There’s so much mandatory e-learning everyone has to wade through in business. So one of the things we want to do is to snap people out of their very low expectations of what learning looks like.

It’s an exciting time and we feel like we’re on a mission to shake up the world of L&D and fight for the individual at the end of the chain who has to go through all this stuff!